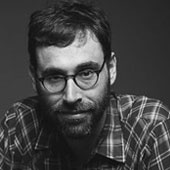 Engaged Faculty Scholars receive support from the Compact and their institutions to undertake a project to deepen the practice and scholarship of campus-community engagement at their respective schools. They will also serve as consultants to another NC college or university seeking to enhance community-engaged teaching and scholarship.

Ivan Weiss is a documentary filmmaker and assistant professor of practice in the Journalism Program at Wake Forest University. His films and multimedia projects have explored a variety of subjects including segregation, gentrification, the experience of musical performances and athletic events, and more. His work has appeared on PBS, Public Books, Paris Review Daily, T Magazine, and elsewhere. Weiss received an MA in Visual Communication from the UNC Hussman School of Media and Journalism in 2014.

As an educator, Weiss seeks to teach students to use the tools of filmmaking and journalism to strip away falsehoods, reveal truth, and see the world with new eyes. While at UNC-Chapel Hill he was an organizer for their annual Carolina Photojournalism Workshop (CPJW), working with communities around the state to connect students with potential subjects for short documentaries. In 2016 he made a documentary called “Festival: A Month in Durham,” telling the story of three music events—Moogfest, Art of Cool, and Bimbé— and the impact they have on racial tensions in a fast-gentrifying city. In 2018, he worked with the Interdisciplinary Humanities department at WFU to develop short documentaries on the university’s staff and grounds crew, which explored the power dynamics both on campus and within the documentary project.

As an Engaged Faculty Scholar, Weiss will facilitate “The Boston-Thurmond Documentary Project” continuing a partnership he has established with the Boston-Thurmond Community Engagement Roundtable (BTCER). While Boston-Thurmond, one of the oldest historically Black neighborhoods in Winston-Salem, is located near the Wake Forest campus, there has been limited interaction between the two over the years. Seeking to bridge the divide, in spring 2020 Weiss worked with the BTCER to design an “Environmental Journalism” project-based course that would benefit the community while also providing a learning experience for students. Weiss received an ACE Fellowship for this project, spending a year gaining guidance and training from Wake Forest’s Office of Civic and Community Engagement.

Through his project Weiss seeks to forge deeper ties with the BTCER, and the Boston-Thurmond community as a whole, by engaging students through classes, independent studies, and internships and to form the structure and set the groundwork for a multi-year  documentary/multimedia project that involves WFU, as well as other local institutions such as Winston-Salem State University. He also plans to refine a database that brings attention to the challenges that the community is facing and working to overcome, and to release a website that will showcase documentary and journalistic work about the neighborhood and project. Ultimately, he hopes to provide a foundation to develop rich scholarship on Winston-Salem’s complex racial history, the scars that live on into the present, and the efforts and difficulties to create lasting change.

This project grew out of his participation in a faculty seminar in the Humanities Institute at Wake Forest, exploring intellectual and academic ideas about being a neighbor and the connection (or lack of connection) between the university and its neighbors. From that beginning, other Wake faculty members from the Communication, English, Political Science and Philosophy departments have been involved to varying degrees with the Boston-Thurmond Documentary Project. This program would help continue and deepen that engagement. Engaged Faculty Scholars receive a stipend and additional funds for professional development. The scholar’s institution is encouraged to provide a monetary match, course release, or other resources.

North Carolina Campus Compact is a collaborative network of 39 colleges and universities committed to educating students for civic and social responsibility, partnering with communities for positive change, and strengthening democracy.