Kids Cooking Coalition heats up the kitchen with first-ever competition 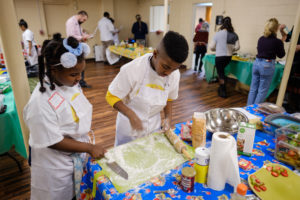 For the first time, the Kid’s Cooking Coalition (KCC) took its talents beyond the classroom and hosted a cooking competition. The four-week-long competition began on January 17 and concluded Friday, February 7 at the YWCA Best Choice Center, made possible through a generous donation by Food Lion, a leading sponsor. Eight KCC students, ages 9-12, who had been with the program since its inception in 2018 were selected to participate and display their cooking skills for the event. 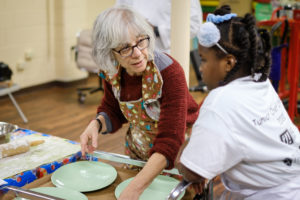 Margaret Savoca checks-in with a student before plating the final dish for the competition.

The KCC is an annual six-week program developed by Margaret Savoca, Ph.D.,  a nutritionist, and community volunteer. The program is run by The Campus Kitchen at Wake Forest University (WFU) and led by Brad Shugoll, Associate Director of Service & Leadership for the WFU Office of Civic & Community Engagement with the help of undergraduate student volunteers.

In an effort to challenge and excite students that had been with the program since its pilot year, Savoca created the KCC Competition to give student chefs something new and exciting to work toward, all the while testing the skills they have honed in the past two years during their participation in the KCC program.

“The main goal of this competition was to try something different and see how the students could be challenged; offering them an opportunity to think more about cooking as a whole and less about the individual lessons,” explained Savoca. “Throughout the competition, we wanted to be able to provide the students with a sense of accomplishment by working together for a common cause and realize that they can not only experience but execute such a level of professionalism with their cooking.” 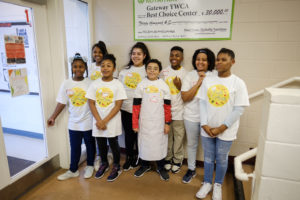 Team Jant and Team Teriyaki pose for a picture together at the YWCA Best Choice Center while the judges deliberate on each of their dishes.

Students were split into two teams of four, Team Jant and Team Teriyaki, where they discussed the concept of the competition, selected the cuisine they planned to prepare, and researched recipes for inspiration. Subsequent weeks were spent reviewing their recipes, practicing their finale dish, fine-tuning plating details, and working through their table presentation.

During the first week, students were introduced to N’Gai Dickerson (Executive Chef, American Heart Association), who spoke with students about food preparation, knife skills, and safety when cutting fruits and vegetables. Chef Dickerson served as a judge at the final event on February 7, alongside Ashley Hardesty Armstrong, Chef & Proprietor of Forsyth Seafood Market & Cafe, Kyle Bradshaw, a Winston-Salem Food Lion Store Manager, and Michael Hastings, Food Editor at the Winston-Salem Journal, on the judge’s panel. 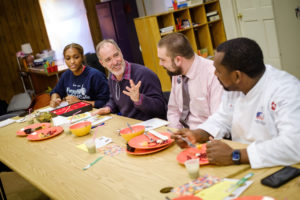 On competition day, each team had an hour to prepare, plate, and present to the judges why they made their dish: from selecting their cuisine to detailing their overall presentation. Students were judged on four main criteria: the team’s overall work ethic, skill, and morale; the flavor of the dish; the use of healthy ingredients throughout the recipe; and the culinary inspiration behind the dish.

At the conclusion of the competition, each student was recognized with a certificate for successfully completing the four-week program, along with cooking supplies from Food Lion that included a ladle, slotted spoon, rubber spatula, pancake spatula, and a variety of wooden cooking utensils along with a crock to hold them. 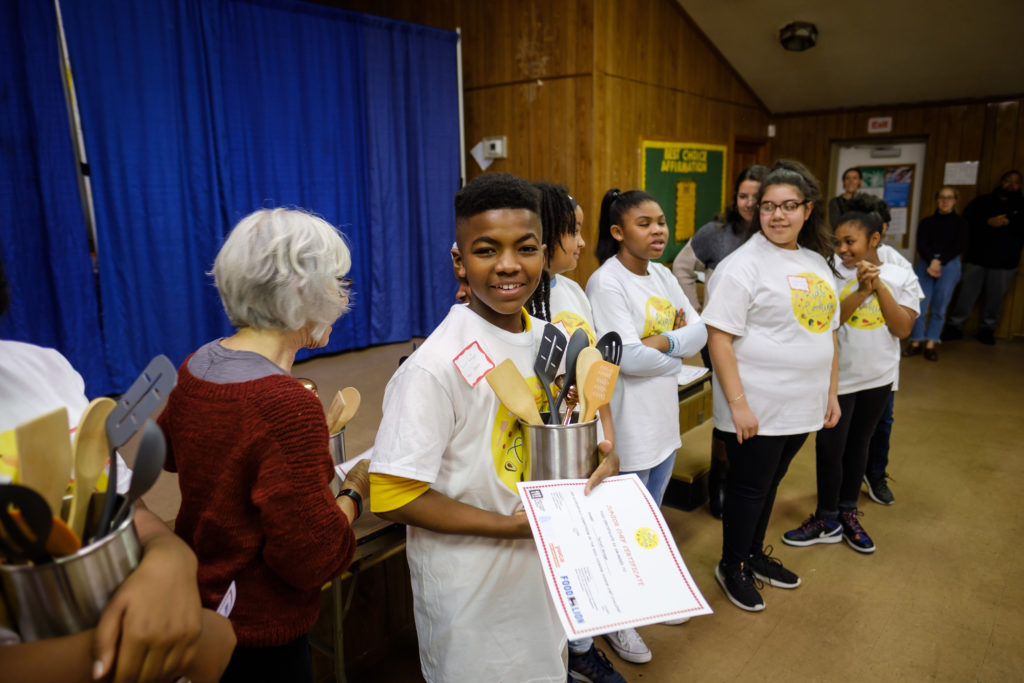 “I am very excited that we got to this point. To see the growth in both the program and these chefs over the last few years has been phenomenal,” said Savoca. “There is so much potential in teaching our children skills that are essential to life, cooking being one of those skills. It allows children to build their confidence, and empowers them to learn and grow.”